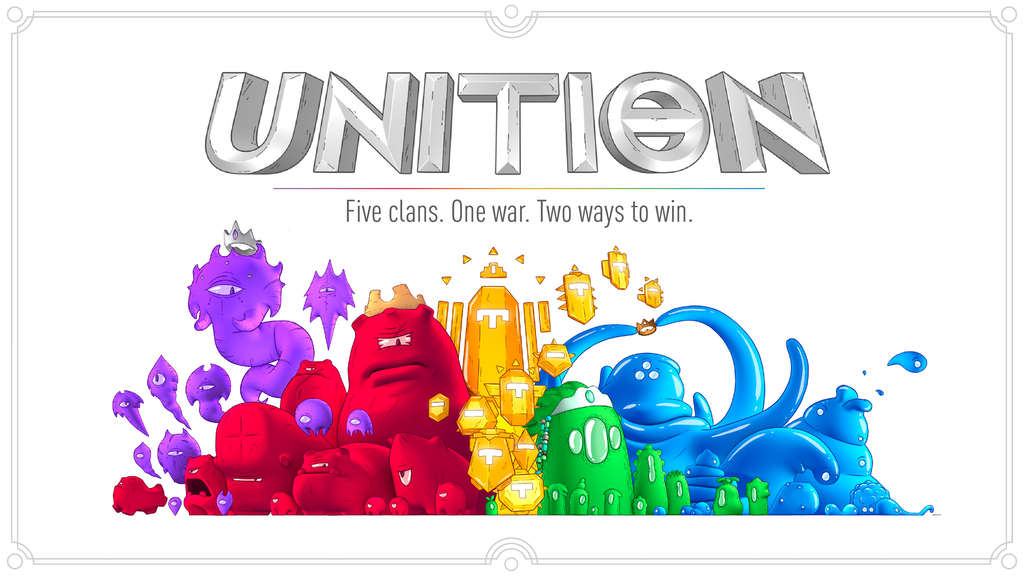 An asymmetric battle royale deckbuilder with two paths to victory.

Latest Updates from Our Project:

Hello backers! Hope everyone had a fantastic weekend. I'm excited to report we're at 80% funding and are officially in the home stretch with 9 days to go. Keep sharing Unition on sites like BGG and with other board gamers that you know. If you post on instagram, tag us at @Lumohedron and we can add you to our stories.  We're almost there!


I've received a couple of comments about shipping prices. While I have the cost estimates on our page, I've been doing research to see if I can get the rates lower. I'm prioritizing reliability and expertise-- lower shipping rates aren't worth your packages getting delayed, missing, or showing up damaged. It's an uphill struggle in the middle of a global shipping crisis, but I hope I'll have some good news soon.


As for Unition's game content, I'm working on ideas for an alternate card back, as well as a concept render of the Game Board stretch goal. I'd love your feedback on them both and plan to share images sometime this week.


The best thing about Kickstarter is its community. In addition to all of your support, I've been able to connect with fellow independent creators, such as Ben Lyon from The Happy Narwhal Company. Ben and I have been able to chat and exchange ideas on board game design and running campaigns. It's this kind of interaction and cross-collaboration that makes Kickstarter unique and more than just a storefront.


Ben has successfully funded his first campaign and has a second one live right now. It's for a game called Run and I encourage you to check it out and show him some support: https://www.kickstarter.com/projects/thehappynarwhalco/run-re-run-2nd-edition-by-the-happy-narwhal-co


RUN provides a cooperative experience of nostalgia with its traditional platform blended with more modern artwork and gaming elements to bring players a well balanced journey, perfect for casual game nights with family and friends. Players will find themselves scrambling to escape their imminent peril while dodging traps, betrayal and using whatever abilities and resources they can to avoid their fates. Be warned... if the team fails to act as a group, those who fall will seek vengeance.


First, I wanted to thank everyone who played Unition this past weekend at WashingCon in DC and Pair O' Dice in Fairfax. I had a blast meeting you all, answering questions, and seeing your enthusiasm. I created Unition to bring entertainment and joy to people and the excitement I've seen so far has been infectious.

Secondly, I started working on a rough design for the box insert for Unition:

With this design, we'd have three wells for the three different token types, six card silos with finger holes on the sides for easier card retrieval, and a large recess at the top for the rulebook and player screens (and game board if we can hit that stretch goal.)


Quite a number of you asked about sleeved cards. With this design there's enough room to accommodate the entire deck of cards sleeved, and  even have room left over for a possible expansion (more on that below). Splitting it out into six different silos will give some options for card organization as well. With this version, we'd be looking at a box size of roughly 10 x 9 x 2.5. This is really just the first crack at the insert and how it could work, and it's done entirely in 3D, so it may be subject to change. Sound off in the comments on your thoughts and suggestions. Feedback is very much encouraged at this stage.


On a separate note, I've had a lot of requests for both a co-op and solo mode of Unition. My goal for this particular campaign is to create a really awesome product for all of you, so I'm focusing on getting just the base game completed at a high level of quality and delivered in a timely manner.


However, the idea of a co-op/solo mode where players work together to defeat a common enemy really resonates with me and would make an excellent addition to the game in the future. While developing Unition over the years, I've had a number of ideas that I couldn't fit into the base game, and one of them in particular would work perfectly as a co-op/solo mode. While I sadly can't make it a reality now, I did want to say that I intend to do it in the future. But one thing at a time: let's get this project funded first!


As we head into the second half of the campaign, I'm happy to report we're over 70% of our goal with support from over 200 of you! Keep up the sharing and spreading the word. We're doing great!

Happy Friday, backers. I'm happy to report that we've passed 60% of funding yesterday and still going strong. With two thirds left of the campaign to go, our numbers are looking great. Thanks for all your continued support and enthusiasm.


I have two upcoming live demo sessions of Unition for those of you local to the DC area:

On Sunday, March 27th at 11am  I'll be at WashingCon at the Walter E. Washington Convention Center

(801 Mt Vernon Pl NW, Washington, DC 20001). The specific location is still to be determined. Keep an eye out for an update here or on Instagram.


Stop by, say hi, hit me with your questions, and take Unition out for a spin! And as always, keep sharing and spreading the word.


Have a great weekend!

Wow! What an amazing 24 hours it's been. I want to thank everyone for their enthusiasm, support, and generosity. I never would have expected we'd hit over a hundred backers and 40% of our goal so quickly. It's incredibly encouraging, and I'm excited and more hopeful than ever that success may be on the horizon. I still have a lot more work ahead of me in terms of promotion, but this much early support for the game makes that task a lot easier. So again: THANK YOU!


Of course, that doesn't mean there haven't been any bumps in the road. It was brought to my attention that our current fulfillment company doesn't ship to the UK or EU. I'd taken for granted that such major destinations would be included in their offerings, but ultimately my fault for not catching that sooner. I'm working with alternate fulfillment companies now to get a solution for all our backers in the UK and across Europe, and as soon as I have those rates, I'll post them in an update. Knowing we have support all over the globe is incredible and I'm going to make sure our UK and EU supporters are taken care of as well. Thanks for your patience and understanding.


Finally, we've added some product shots to the campaign page to show the components in more detail. Keep in mind the product we have now is a prototype and will actually improve in quality once we get to production.


I'm thrilled to report we've passed the halfway mark late last night, and we're now sitting at 51%. That's incredible progress for just the first three days of the campaign. While the initial backing surge has tapered off, we're still going at a rate that should bring us past our funding target. For that I'm excited and still very thankful for all your support. We're doing this thing!


Last night the guys at Aleventures organized an in-person preview at Saga Games, a local shop in Frederick, MD. It was excellent meeting new folks and fans of the game and seeing how they each brought their unique strategies (and questions!) to the table. I'm planning on doing more in-person previews at different stores in the area-- stay tuned for more, and check out Saga Games in the meantime.

Lastly, an update on shipping-- I'm closing in on some pricing for the costs for UK/EU folks and should have an answer early next week. Thanks for your patience!